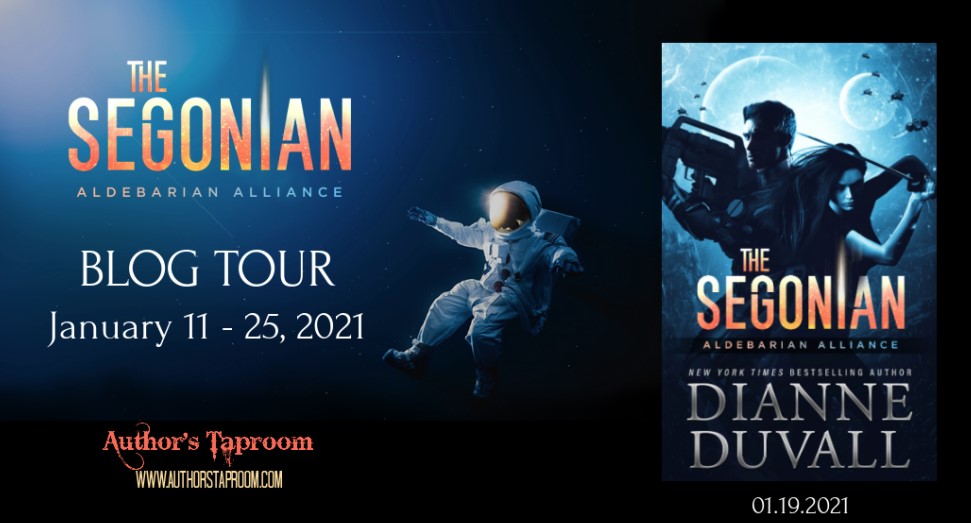 Author’s Taproom is excited to celebrate the release of Dianne Duvall’s THE SEGONIAN, coming January 19th, 2021! THE SEGONIAN is the second book in the new sci-fi romance series, Aldebarian Alliance. Below you will find information on the book, blog tour, the release day blitz, and more! The Blog Tour will run January 11th – 25th, 2021, and consist of exclusive posts from the author, Q&A’s, and excerpts with a tour-wide giveaway!

The Segonian
Book #2 Aldebarian Alliance
By Dianne Duvall
Releasing date: January 19, 2021
Eliana’s life has never been what one might term ordinary. At least, it hasn’t been for a very long time. As a powerful Immortal Guardian, she spends her nights hunting and slaying psychotic vampires that most of humanity doesn’t even realize exist. Then an opportunity arises that instantly makes her extraordinary existence seem downright boring. The leader of the Immortal Guardians asks her to guard a group of mortals who are embarking upon a voyage across the galaxy to the planet Lasaran. How could she possibly say no?

In no time at all, Eliana is hurtling through space on board a Lasaran battleship and getting to know not one but two alien races. It’s the most exciting adventure of her long life… until the ship is unexpectedly attacked. Amid the chaos and destruction that follow, she valiantly helps everyone she can before an explosion renders her unconscious. When Eliana awakens, she finds herself alone, floating in space, clad only in a spacesuit, with no ship in sight. Alone—that is—except for the warm, deep voice that carries over the comm in her helmet.

Commander Dagon and the crew of the Segonian battleship Ranasura respond to a distress call from their Lasaran allies and join a massive Alliance-wide search-and-rescue mission. He quickly achieves communication with a lone Earthling female and races toward her. Every time they speak, his fascination with her grows and he becomes more desperate to reach her before her oxygen supply runs out. Her strength, bravery, and humor entice him, even more so when she defies all odds and they meet in person.

As he and Eliana embark upon a quest to find her missing friends, a bond swiftly grows between them that deepens with every laugh and smile and tender touch they share. But they are not the only ones searching for Earthling survivors. When Eliana herself becomes the hunted and their enemies begin to close in, can the two of them fight their way to victory, or will their enemies take everything?

For the latest news on upcoming releases, contests, and more, please sign up to receive Dianne’s Newsletter or visit DianneDuvall.com. You can also find Dianne online . . .