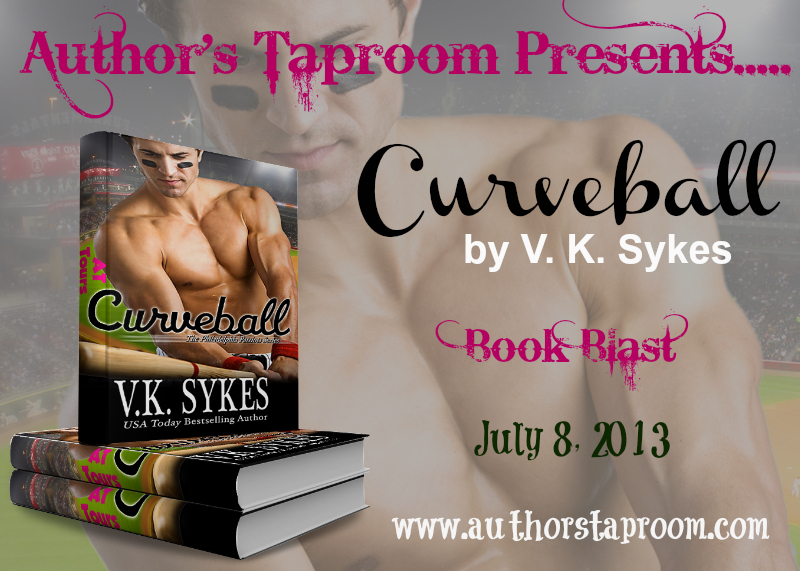 We are now scheduling a one day book blitz for CURVEBALL by V.K. Sykes

This book blitz will be held on July8th, 2013. This blitz will consist of a Book Spotlight with or without excerpts, Reviews and Individual Blog Giveaways. We are looking for approximately ten participating bloggers and this does not need to be ‘top post’ due to the late date.

Taylor Page never wanted anything but a career in major league baseball.  Through talent and guts, she’s finally landed a position as Assistant General Manager of the Philadelphia Patriots.  The only problem is that most men in baseball still don’t take a woman exec seriously, especially a thirty-year old blonde with no on-field experience.  She needs to do something big to convince her bosses she has what it takes to run a team.

Veteran Pittsburgh outfielder Ryan Locke’s career is in jeopardy when a suddenly unreliable throwing arm comes on top of rehab from a major injury.  A single parent with a troubled daughter and an alcoholic mother to provide for, retirement is out of the question. Ryan’s best hope is for a trade to an American League team as a designated hitter, allowing him several more years of play.

When Taylor needs a replacement for an injured first baseman, she comes up with an innovative but risky idea:  convince her boss to make a trade for Ryan Locke, and then convince the still talented slugger to play first base for the Patriots.  With Ryan dead-set against that plan and both their careers on the line, neither Taylor nor Ryan can afford the explosive physical attraction between them.  But despite Taylor’s best efforts to resist Ryan’s campaign of seduction, she’s not sure she’s got the willpower to keep from playing along.

V.K. Sykes is really two people – Vanessa Kelly and Randy Sykes, a husband and wife team who write USA Today Bestselling contemporary romance. Randy excels at plot and characterization, but tends to fall down on the job when it comes to that pesky old thing called emotion. That’s where Vanessa steps in. She usually writes the sex scenes too, since Randy is a bit uncomfortable when it comes to that sort of stuff. Vanessa also writes award-winning Regency-set historical romance for Kensington Zebra under her own name. You can find V.K. on the web at http://www.vksykes.com and Vanessa at http://www.vanessakellyauthor.com

Vanessa is also a member of Rock*It Reads, a group of traditionally published authors who are committed to bringing high standards and professional quality to their independently published works. Members include New York Times bestselling and award winning authors like Pamela Clare, Monica Burns, Elisabeth Naughton and Kris Kennedy. You can find Rock*It Reads on the web at http://www.rockitreads.com.